about screencaps join the fanlisting list of members codes main

Mass Effect is a science fiction role-playing game series developed by BioWare. The plot centers around a human soldier named Shepard (male or female) and the mission to save the Galaxy from a biomechanical race of the Reapers.

Tali'Zorah nar Rayya (or simply Tali), voiced by Liz Sroka, is introduced in Mass Effect as a young quarian machinist. Soon she becomes a member of commander Shepard's squad. 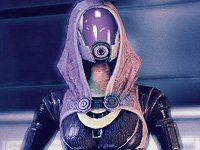 If she survives the final mission of the second game, she appears in the Mass Effect 3 and reunites with Shepard. If Tali does not survive the events, her role is filled in by quarian admirals Daro'Xen vas Moreh an Shala'Raan vas Tonbay.

The site exists exists for nonprofit entertainment purposes only. Everything belongs to BioWare, no copyright infringement intended. I am not affiliated with BioWare in any way. Exiled fanlisting is a part of sleety.org collective. You're looking at the layout version 1.2, made by me (deerstop) in Adobe Photoshop CS3 and coded with Notepad2. Original image taken from Mass Effect Wiki.