info gallery join members codes home
Star Trek, also known as Star Trek XI, is the eleventh film in the universe of Star Trek, announced by Paramount Pictures in 2006. The film was directed by J. J. Abrams. Contrary to fan's expectations, new movie was not a prequel to original series, but an original story set in alternative timeline. After release in 2009 it was well-received by critics and was nominated for four "Oscar" awards.

"A cataclysm in the 24th century throws two ships back in time to the 23rd century, altering the course of history. With a different life where he never knew his father, James T. Kirk becomes a brilliant yet cynical misfit who is finally convinced to join Starfleet by Captain Christopher Pike in 2255. Three years later, Kirk, Vulcan First Officer Spock, and the young crew of the new USS Enterprise, with guidance from Spock's future self, must figure out a way to work together to prevent the one responsible for the death of Kirk's father, the future Romulan known as Nero, from destroying the Federation in a mad quest for vengeance." 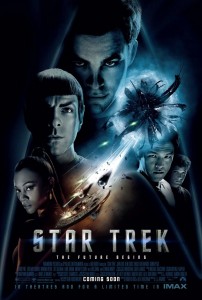 Star Trek Into Darkness, which serves as the sequel to Star Trek, is set to be released on May 17, 2013. Most of the crew of the previous film are returning, including director J. J. Abrams, composer Michael Giacchino, actors, and etc. The "original Spock" Leonard Nimoy will not be making an appearance. The film will also introduce a new villain, played by Benedict Cumberbatch.
Part of TFL and sleety.org. Valid HTML and CSS. Fight Spam! / contact me?