Prince of Persia is a video game series franchise created by American developer company Broderbund, which is now defunct. Starting with Prince of Persia: The Sands of Time (2003), the third installement of the series, the devopment process was taken by Ubisoft. The Prince stay unnamed through the whole Prince of Persia franchise development. More about the games?

The film Prince of Persia: The Sands of Time is set in the Sassanid Empire. A Persian King Sharaman sees a very brave boy in a public market. Delighted with his skills and bravery, Sharaman decides to adopt the boy into his royal family.

The film was produced by Jerry Bruckheimer Films, distributed by Walt Disney Pictures and directed by Mike Newell of Harry Potter and the Goblet of Fire fame. The score was composed by Harry Gregson-Williams. 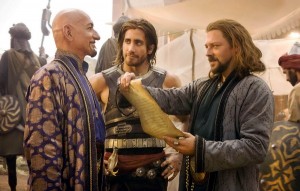 Prince Dastan, adopted boy from the prologue and now a full-grown man, takes part in a military campaign alongside his brothers, Tus (heir apparent), Garsiv and his uncle Nizam, who also serves as a king Sharaman's adviser. Their road lies through the sacred city of Alamut. According to the Nizam's evidence, the city supplies with weapons the enemies of the Empire. Prince Tus decides to attack Alamut in spite of his father's request not to touch the sacred city.

Alamut is easily taken by Persian army. No weapon can be found, except that Dastan accidentally captures a strange looking dagger and leaves it as a souvenir.

Upon arriving to Alamut king Sharaman scolds his sons for disobedience and the damage they brought to the sacred city without any good reason. Tus assures his father that he would find the hidden weapon at all costs. During the celebration of Sharaman's army victory, the King is given a poisoned robe as a present from Dastan, who in return actually got it from Tus. Sharaman dies of poison, Dastan is blamed for the King's murder. He flees from the palace with Tamina, a beautiful Princess of Alamut.

In exile Dastan finds out that his dagger holds the power to turn back time. He decides to fix history and to prevent the death of his father. Together with Tamina, he travels to Sharaman's funeral and meets his uncle Nizam in order to ask for help. Dastan notices that Nizam's hands are burned by poison and inevitably comes to conclusion that the murderer of his father was Nizam himself.

Indeed, Nizam is plotting to take the throne through obtaining powers of the legendary Sands of Time, and therefore he needs Dastan's dagger. Nizam plans to reverse time and let his brother Sharaman die young, so that he could become a King. To keep the dagger away from Nizam, Dastan and Tamina must hide it in a secret sanctuary.

(contains a translation of Prince of Persia (film) article from ru.wikipedia)

The score was composed by Harry Gregson-Williams. Single CD was released on May 25, 2010 under Walt Disney Records label.