about join members
codes home
The fanlisting was last updated on 27th July 2022, with Spider as the newest member(s). ♥ There are currently 27 fans listed and 0 waiting to be freed from the Matrix.
Powered by Enthusiast.

Thomas Anderson, known under his hacker alias Neo, is the main character of The Matrix films, directed by Larry and Andy Wachowski. He was portrayed by Canadian actor Keanu Reeves. On the surface Neo is your typical "another guy", who leads a quite life as a programmer for respectable software company. He's also a computer hacker, and is well-known in the underground world of hackers. 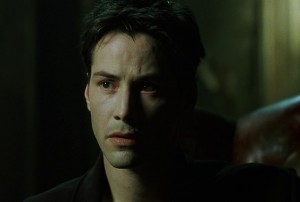 At the beginning of the series Morpheus (portrayed by Laurence Fishburne) finds Neo and reveals that he, in fact, lives in a big illusion. His body and his mind belong to the Matrix - an illusory reality created and supported by intelligent machines, that a long time ago enslaved people to use them as a source of energy. Humans are bred in the incubators and kept enslaved until death. Unfortunately those who are connected to the Matrix (i.e. almost all mankind) do not realize that the reality around them is actually a computer-generated dream world.

A group of free humans, Morpheus included, organized a resistance. To quote allmovie.com,

Morpheus, however, is convinced Neo is "The One" who can crack open The Matrix and bring his people to both physical and psychological freedom.

Please do not hotlink the images.

The site exists exists for nonprofit entertainment purposes only. Everything belongs to its respective owners, no copyright infringement intended. Images that are displayed on this site © Warner Bros. Pictures. The Red Pill fanlisting is a part of sleety.org and TFL. You're looking at the layout version 1.0, made by me (deerstop) in Adobe Photoshop CS5 and coded with Espresso. Textures courtesy of Hybrid Genesis.
Part of TFL and sleety.org. Valid HTML and CSS. Fight Spam! / contact me?