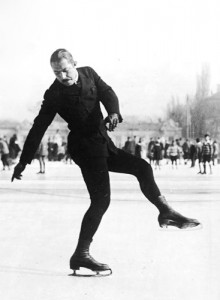 After World War II American and Canadian skaters started to compete with European skaters on equal footing. Athletic Americans demonstrated complex jumps and fast spins, while the European skaters' biggest advantage was the artistic side of skating and superb compulsory figures (aka the figures).

The first post-war World Championships in 1947 was won by Hans Gerschwiler of Switzerland, who got most benefits in the figures discipline and defeated all opponents despite two falls in free skating. The only Swiss skater to repeat this success was Stephane Lambiel in 2005 and 2006. 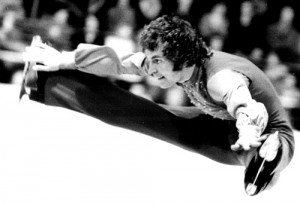 As for Europe, in the 1960s French coach Jacqueline Vaudecrane gave the world two wonderful skaters Alain Giletti and Alain Calmat. The latter was especially famous for interesting choreography and complex connecting elements. 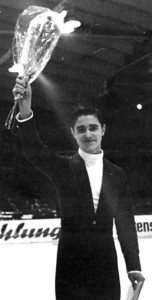 In 1966-1968 Austrian skaters Emmerich Danzer and Wolfgang Schwarz competed equally successful both in figures and free skating. British school, represented by such skaters as Olympic champion John Curry, was well-known for its academic approach and compulsory figures of the highest quality.

The site exists exists for nonprofit entertainment purposes. The Gambler fanlisting is a part of sleety.org. You're looking at the layout version 2.0, best viewed with resolution 1024x768 or higher. Graphics were done by me (deerstop) with Adobe Photoshop CS5 and coding with Espresso, Photoshop textures courtesy of Hybrid Genesis. History of men's skating was partially translated from ru.wikipedia.org. Illustrations from German Federal Archive (Deutsches Bundesarchiv).
Part of TFL and sleety.org. Valid HTML and CSS. Fight Spam!