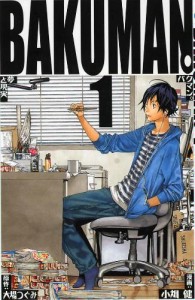 Bakuman was written by Tsugumi Ohba and illustrated by Takeshi Obata - authors who are well-known for their collaboration on famous Death Note series.

The first chapter of Bakuman was published in Shonen Jump weekly magazine in April 2008. In 2010 it was adapted into anime from J.C.Staff studio. The plot revolves around two classmates, Moritaka Mashiro and Akito Takagi, who want to become popular manga artists ("mangakas"). They set up a manga studio at the apartment of Moritaka's dead uncle. Moritaka is a talented artist, though he's often displeased with his own work. Akito becomes a script writer.

According to Hero Complex, the title plays off the Japanese words bakuhatsu (explosion), baku (a dream-eating monster) and bakuchi (gamble — Moritaka insists working in manga is a gamble).

However baku has a lot of meanings, including "burst of laughter", "bonds", "vague" or "wide", "lonely" and even "waterfall". So why "bakuman"? No one knows for sure!